In The Review Queue: The Horse at Gettysburg 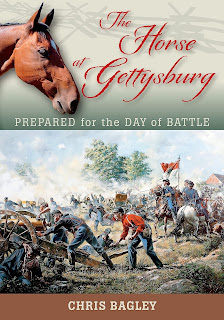 The Horse at Gettysburg:
Prepared for the Day of Battle
By Chris Bagley

Horses are one of the many unsung heroes of the American Civil War. These majestic animals were impressed into service, trained, prepared for battle, and turned into expendable implements of war.

There is more to this story, however. When an army’s means and survival is predicated upon an animal whose instincts are to flee rather than fight, a bond of mutual trust and respect between handler and horse must be forged. Ultimately, the Battle of Gettysburg resulted in thousands of horses killed and wounded. Their story deserves telling, from a time not so far removed.

Chris Bagley hails from Canton, Ohio, where he resides with his wife Becky. Chris has been a Registered Nurse for 31 years and currently works as a surgical nurse. He became a Licensed Battlefield Guide at Gettysburg National Military Park in 2016. He always had a love and fascination of horses from childhood which continues to this day.

Email ThisBlogThis!Share to TwitterShare to FacebookShare to Pinterest
Labels: Battle of Gettysburg, horses, In The Review Queue