In The Review Queue: Lincoln and Native Americans 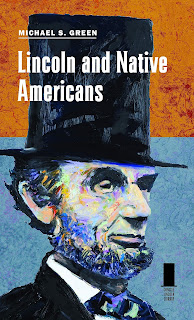 President Abraham Lincoln ordered the largest mass execution of Indigenous people in American history, following the 1862 uprising of hungry Dakota in Minnesota and suspiciously speedy trials. He also issued the largest commutation of executions in American history for the same act. But there is much more to the story of Lincoln’s interactions and involvement, personal and political, with Native Americans, as Michael S. Green shows. His evenhanded assessment explains how Lincoln thought about Native Americans, interacted with them, and was affected by them.

Although ignorant of Native customs, Lincoln revealed none of the hatred or single-minded opposition to Native culture that animated other leaders and some of his own political and military officials. Lincoln did far too little to ease the problems afflicting Indigenous people at the time, but he also expressed more sympathy for their situation than most other politicians of the day. Still, he was not what those who wanted legitimate improvements in the lives of Native Americans would have liked him to be.

At best, Lincoln’s record is mixed. He served in the Black Hawk War against tribes who were combating white encroachment. Later he supported policies that exacerbated the situation. Finally, he led the United States in a war that culminated in expanding white settlement. Although as president, Lincoln paid less attention to Native Americans than he did to African Americans and the Civil War, the Indigenous population received considerably more attention from him than previous historians have revealed.

In addition to focusing on Lincoln’s personal and familial experiences, such as the death of his paternal grandfather at the hands of Indians, Green enhances our understanding of federal policies toward Native Americans before and during the Civil War and how Lincoln’s decisions affected what came after the war. His patronage appointments shaped Indian affairs, and his plans for the West would also have vast consequences. Green weighs Lincoln’s impact on the lives of Native Americans and imagines what might have happened if Lincoln had lived past the war’s end. More than any many other historians, Green delves into Lincoln’s racial views about people of color who were not African American.

Michael S. Green, an associate professor of history at University of Nevada, Las Vegas, is the author or editor of three books on the Civil War, including Lincoln and the Election of 1860 (Southern Illinois University Press) and Politics and America in Crisis: The Coming of the Civil War, and several books on Nevada, as well as dozens of articles and essays. He is on the editorial advisory board of the University of Nevada Press and is the executive director of the Pacific Coast Branch of the American Historical Association.