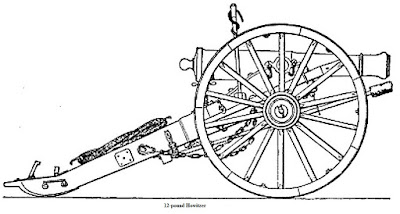 Early this morning the rebels planted a battery in the woods on the opposite side of the river, and sent shot and shell crashing into our camp. DeGolier's battery was soon in position, and silenced them before any damage was done. I hope DeGolier and his battery will be with us through all our engagements, for a braver man never lived. Some of his artillerymen said, he would rise up in his sleep, last night, and say, “give them canister, boys!”

I was detailed with a squad to patrol the river bank, and, in doing so, came in collision with the enemy. Some of the boys could not resist the temptation to take a swim. They did not think of the danger, until they were fired upon. When they went in, they complained of the water being cold; but they were not in long before it became too hot for them. They got out of that stream remarkably quick, and some did not stop to get their clothing, but flew for camp as naked as they were born. They did not know but the woods were full of rebels. A soldier's life has its share of fun as well as of the sad and marvelous.

I suppose this is considered an unsafe place to leave unguarded, so we remain another day.

SOURCE: Osborn Hamiline Oldroyd, A Soldier's Story of the Siege of Vicksburg, p. 7
Posted by Jim Miller at 1:30 AM