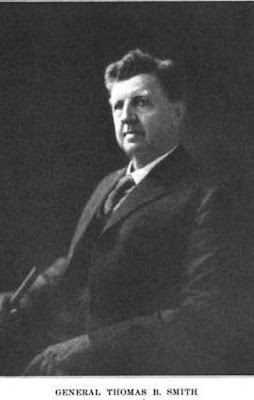 General Thomas Benton Smith, who was the youngest general in the Confederate army and enjoys the further distinction of being the only one now living, has reached the venerable age of eighty-five years. His birth occurred in Rutherford county, Tennessee, on the 24th of February, 1838, his parents being James M. and Martha (Page) Smith, the former a native of Dinwiddie county, Virginia. He comes of English ancestry in the paternal line and of Welsh descent on the maternal side, and his mother's people lived in North and South Carolina before coming to Tennessee. General Smith still has in his possession a silver piece that his maternal ancestors brought from Wales and which was given to him by his mother. His maternal grandparents, John and Martha Page, lived ten miles from Franklin and five miles from Triune. James M. Smith, the father of General Smith, was a carpenter of Mechanicsville, Rutherford county, this state, who made and sold gins, while his wife made cloth to provide wearing apparel for her children and the ten negro slaves owned by the family. Their home was a log house of two rooms and a side porch. James M. Smith was a soldier of the War of 1812, participating in the battle of New Orleans under Andrew Jackson. When the Civil war was inaugurated he and his wife owned one hundred and five acres of land and other property to the value of about ten thousand dollars.

In the acquirement of an education Thomas Benton Smith walked two miles to attend common school and later became a student in a military academy at Nashville, Tennessee, from which he was graduated. Andrew Johnson gave him a lieutenant's commission and he then went to West Point, New York, attending school for sixteen years altogether. The opening of the Civil war found him busily engaged in the cultivation of a farm of one hundred and five acres which he owned in the vicinity of Triune and he left the plow handles to enlist in the Zollicoffer Guards of the Twentieth Tennessee Regiment, being sworn in at Triune on the 17th of May, 1861. Both he and his brother, John M. Smith, joined the Confederate forces, leaving their mother and the negroes at home. Thomas B. Smith was sent with his company to Camp Zollicoffer and in January, 1862, took part in the battle of Fishing Creek, while subsequently he fought at Shiloh, Murfreesboro, Chickamauga, Baton Rouge, Franklin and Nashville. His horse was shot from under him at Baton Rouge, Louisiana, and again at the battle of Atlanta. After he had surrendered he was struck on the head with a sword by a Yankee colonel named W. S. McMillen, the blow splitting the bone of his head and exposing his brain, and he was placed in the Tennessee state prison, which was being used as a hospital. Following his discharge at Fort Warren, Massachusetts, he was given transportation and came direct to Nashville. Vernon K, Stevenson, the first president of the Nashville & Chattanooga Railroad, who was his close personal friend, offered him a position in recognition of the fact that General Smith had made his son, Vernon K. Stevenson, Jr., a member of his staff in 1864. General Smith engaged in railroad work first as a brakeman, then as freight conductor and later won promotion to the position of passenger conductor on the Nashville & Chattanooga, being identified with railroad interests altogether for ten years, during a part of which period he was in the service of the Nashville & Decatur. After leaving the railroad he became a candidate for congress in the counties of Williamson, Wilson and Rutherford and following the election of E. I. Gollady of Lebanon, Tennessee, returned home, where he remained until the death of his mother. He was then sent to the Central State Hospital of Nashville, where he has been a patient for about forty-seven years, or since 1876, when the institution was under Dr. Callender's administration. He has always been accorded the best and kindest treatment and has numerous friends whose regard he prizes. His closest kin are nephews and nieces. He enjoyed the personal friendship of many distinguished men of an earlier day, including Andrew Johnson, General Felix K. Zollicoffer, General John C. Brown, General William B. Bate, General Bragg, who handed him his commission as brigadier general, General W. J. Hardee, General Frank Cheatham, Colonel E. W. Cole, John W. Thomas and W. L. Danley. Lieutenant James L. Cooper of Nashville and Dr. D. B. Cliff, Sr., of Franklin, Tennessee, were members of his staff while he held the rank of brigadier general in 1864. He attends the annual reunion of the Twentieth Tennessee Regiment of Confederate Veterans at Centennial Park, also goes to Mount Olivet once a year to decorate the graves of Confederate soldiers and occasionally takes other trips to Nashville. He declares that he is as happy as anyone could be under the circumstances and he is spending the evening of life in quiet content.

(Since this biographical sketch was written, General Smith has passed to his reward. In honor of his distinguished character and services his body was placed in state in the hall of the house of representatives in the capitol of Tennessee, where the funeral services were held under the auspices of the United Confederate Veterans.)